This story is a sequel to From One Photograph to a Journey of Discovery, my research into the tragic romance of my great-uncle Moshe Rabinowitz and Paula Lichtzier, recently published by JewishGen.

It had been a journey of discovery, starting with a photograph given to me in Israel, and had taken me to Germany, South Africa, Poland, the United States, UK, Canada and back to Israel, with updates to my research findings in each destination. It was the subject of my lecture at the International Association of Jewish Genealogy Societies (IAJGS) conference in Jerusalem in July 2015, and at subsequent venues and presentations in South Africa and Australia.

But my search wasn’t complete. The details regarding the driver of the vehicle in the fatal accident were still a mystery. The 1931 The Argus newspaper cutting told us that Mr. Katz, the driver of the vehicle in which Moshe (Morris) was a passenger, was the manager of the Mowbray Hotel. Mowbray is a suburb of Cape Town. I tried accessing the archives of the company that once owned the hotel and the bus company most likely involved in the accident, and also consulted some Cape Town historians. Although I wasn’t successful, I was still hopeful that more leads would come my way. 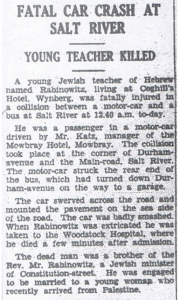 In June this year I met Professor Colin Tatz and Vernon Katz in Sydney for coffee. Vernon, being a Katz and from Cape Town, was very interested in my story and the mystery of Mr. Katz, the driver. Vernon and I started corresponding and on 3rd September 2016 Vernon wrote this to his database:

This is a stab in the dark but can you help Eli Rabinowitz (who lives in Perth since 1986, ex Cape Town) trace family of the Mr. Katz who drove the car in 1931 in which Eli’s great-uncle Moishe Rabinowitz was killed in Woodstock / Salt River? – see (the article in Avotaynu) below. Please let me and Eli know if you have any information.

A response came from Selwyn Katz in West Harrison, NY on the same day:

SA Breweries had a company called Retco, the holding company for its one and two star hotels.  At the end of the sixties they started to offload these hotels and my (Katz) family picked up six of them including the Mowbray. It is not impossible that this Mr. Katz was family of mine but I have no way of finding out. My oldest living relation was born around 1931 so she would not know.

On the 9th September 2016 I was in the process of replying to another responder, Solly Epstein in Cape Town, in which his friend and author, Ivan Kapelus in London (From The Baltic To The Cape), had suggested I make contact with the National Library and Western Cape Archives to further my research. I decided to go online and do a quick search. One can only see the titles of the documents online and then one must follow up with a visit to the reading room to sight the actual document. I had previously used the reading room of the Western Cape Archives on a visit to Cape Town in 2012 to find the death notice and other personal documents of my great-uncle, Morris Rabinowitz.

I now went online and entered “Katz” and “1931” in the database search. The following was the last of four results:

While only circumstantial, this sounded like the Mr. Katz I was looking for!!!  The accident had occurred on 8th April 1931.

Still on the 9th September 2016, after emailing several people, Ann Rabinowitz (no relation to me) of Miami replied:

If the Leo Katz in the Archives is the correct one, there is also a record in the South African Jewish Rootsbank that lists a Leo Katz who was born 1902 and died May 3, 1961 and is buried in Pinelands #1.  He would have been 29 in 1931.  His tombstone has his name as Yahudah Leib ben Reuvain HaKohain Katz. 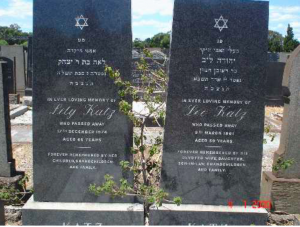 From the Cape Town Jewish Cemeteries Maintenance Board Website, I found a photo of the headstones.

This photo shows the matzevot of Leo Katz and his wife Lily. With this information, I searched these two names and found the family details on the Geni.com website. After numerous calls, I was able to track down Mr. Katz’s grandson in Sydney (I live in Perth!). I called him on 15th September and asked him if his grandfather was Leo Katz. He said “Yes”. Then I asked him what his grandfather had done for a living. He answered that Mr. Katz had been in the hotel business. I then asked, “The Mowbray Hotel?” and he answered “Yes”!

I had at last found my man!

The grandson was very co-operative. He was aware that his grandfather had been involved in an accident in which, he said, a hitchhiker had been killed. That was the first I had heard of a hitchhiker and I was puzzled. The grandson sent me a photo of Mr. Katz.

My brother-in-law, Anthony Reitstein, visited the Western Cape Archives on my behalf on 18th September and called for the document, Rex versus Leo Katz. The only problem was that the document was missing! Fortunately, it was found a few days later by the Archivist, Jaco van der Merwe, who arranged for all the pages to be scanned and emailed to me.

Finally, on 25th October 2016 I received two emails, totaling 33 pages, of the court proceedings of Rex versus Leo Katz. There were many technical details in the evidence given, but the following grabbed my attention and shocked me: 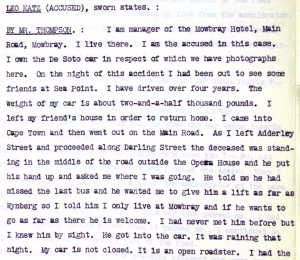 He hitchhiked to get home to the Coghills Hotel in Wynberg;

Mr. Katz stopped to give him a lift in the city outside the Opera House;

Mr. Katz was only going as far as Mowbray;

Mr. Katz and Morris did not know each other personally;

The distance from where Morris was picked up to the accident, was about 4km;

They hit a bus that was turning to go down Durham Rd;

From the time Morris was picked up until his death was at most 10 minutes;

this was the total time that they were together.

Such was their fate!

Mr. Katz was found guilty of culpable homicide and fined 40 pounds sterling and lost his driver’s license for a year. Morris was dead! Morris’s fiancée Paula Lichtzier’s life was in turmoil just a few weeks before her planned wedding. 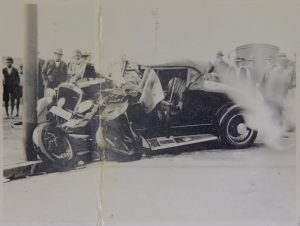 This is the sad conclusion to the mystery of Mr. Katz, the driver, and the accident, which killed Morris Rabinowitz.

But something special is in the process of developing.

I called the grandson in Sydney to tell him the outcome of the case and to arrange to forward him the email of the court proceedings. He told me that his grandfather, Leo, was a good natured and genteel man and that by giving my great-uncle Morris a lift, Leo was performing a good deed or mitzvah. Fate saw to it that it went horribly wrong and turned into a tragedy!

When initially writing this article, I had decided not to publish the names of Mr. Katz’s family. I finally decided to ask him whether he would give me permission to use his name and his grandfather’s photo, and he gave his approval. We then discovered a remarkable coincidence: Mr. Katz’s great-granddaughter and my Australian born daughter-in-law had been in the same class at Moriah College in Sydney and on the same school orchestra international tour of the USA.

Leo’s grandson, Brian Fainsinger, and I have realized that the discovery of this tragic event has forged a meaningful connection between us. After such a long passage of time, we are both committed to creating a positive outcome, a completion of the mitzvah Leo began 85 years ago on 8th April 1931.

Brian and I met for the first time in Sydney in February 2017 and discussed several ideas. Our project will be named in honor of Leo and Morris. 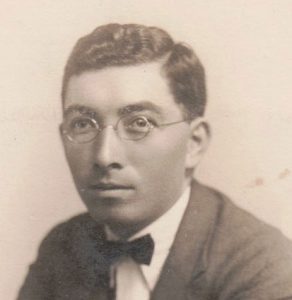 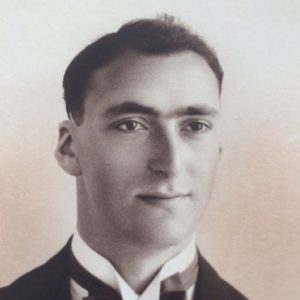 Eli indicated that the following resources were useful in researching the story of Mr. Katz:

The National Archives of South Africa

The Cape Jewish Cemeteries Maintenance Board