As we dig into our family histories, new information tends to raise new questions. When my grandfather Louis Touger and his brother Max first arrived in the United States in July of 1904, they settled in Passaic, New Jersey, where my father was born seven months later. On their ship’s manifest, both of them indicated they were going to a Samuel or Salman Gellmann in Passaic. Here already were two perplexing questions. Number one—why Passaic?  What drew them there?  Number two—who on earth was Samuel Gellmann?  The name meant nothing to any of my older relatives when I began exploring my Touger family history. Yet, on Max’s manifest listing, this Gellmann was noted to be a “brother,” which I assumed was a mistake.

A third question—seemingly unrelated—had also puzzled me. Why would Louis and Max both have daughters named Rose, roughly the same age, both born a few years after the two brothers arrived in America?

I saw little hope of answering this last question, but the Passaic question was one I could get a start on. Bits of information I had gleaned from JewishGen suggested that Passaic might already have had a small influx of Jews from Lepel (now Lyepel, in Belarus). Lepel is the town Max came from, according to the manifest, and he and my grandparents are buried in the Independent Lepler Benevolent Association sections of two cemeteries (Baron Hirsch on Staten Island and Beth David in Elmont, New York).

So about a decade ago, I put out inquiries on JewishGen’s Belarus Special Interest Group (SIG) about a Samuel Gellmann in Passaic, possibly with Lepel connections. I heard back from a woman named Leslie in New Jersey whose family had lived in Passaic. She knew of Gelmans in her family—her mother’s cousins—but no Samuel Gelman. She asked me if I had any relatives named Wimenitz, her mother’s maiden name. But that drew a blank. We left it at that, agreeing to stay in touch if either of us came up with anything more.

For about a year, nothing. Then Leslie wrote again. She’d heard from a woman named Diana. Diana had both Gilman/Gellman and Wimenitz connections in Passaic. She thought, in fact, that her great grandfather, Samuel Gellman (!) had changed his name from Wimenitz, but she wasn’t sure. Diana also mentioned in her email that her great-grandfather’s wife had died early on (in 1909) and he had remarried. Her grandfather’s wedding certificate, she added in passing, showed that her great-grandfather’s first wife had been named Rose Lea Touger!  Leslie forwarded this news to me with the understatement, “You might find this interesting.”

Almost immediately, Leslie had gone to the Ellis Island Data Base and found ship’s manifest information for Sam and Rose Gellman/Wimenitz. Salomon Wiminitz [sic] arrived first, then Rose in 1902. She was going to husband Salman Wiminitz in Passaic NJ, according to her manifest entry. Even before I saw the manifests myself, I thought, “Well, if these are the right people, Sam will appear as Salman and Rose will appear as Rokhel, my aunt Rose‘s Hebrew name. And they will be from Lepel.”  All of this proved to be right on target.

It all fit if “brother” really meant brother-in-law. In that case, Rose was my grandfather’s sister, a sister we never even knew had existed. That would explain why, in the two years following Rose’s death, a baby girl born to my grandparents was named Rokhel Lea—Rose in English, and Max and his wife also named a new daughter Rose.

To be sure about all this, though, we needed further corroboration. Leslie asked if I knew the address in Passaic where my father was born. The copy I had of his birth certificate didn’t say, but it wasn’t an original document. It had been issued to correct a misspelling on the original. A fortunate error, it turned out, because a paper trail existed for the correction. Leslie—bless her heart—checked with the New Jersey State Archives and found it, a notarized document from 1943. The document confirmed my father’s March 1905 birthdate, and it recorded sworn testimony that the birth took place at 111 Monroe Street. The person who had provided the testimony was Mollie Touger, Max’s wife and my father’s closest aunt. She knew this, it stated, because she “was present at birth.” 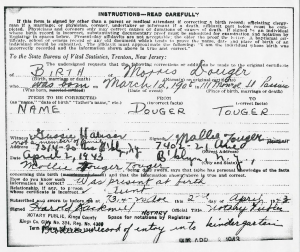 So now we had an address. Were my grandparents living at that address in 1905?  Leslie checked the 1905 New Jersey census to see. The bad news:  they weren’t listed there. The surprising good news: Sam and Rose Gelman were. My father was born at their address, with his aunts Mollie—and no doubt Rose as well—in attendance!

Rokhel and Salman Wimenitz, having become Rose and Sam Gelman in America, were what drew my grandparents to Passaic before they followed the more usual path to the lower East Side and then Brooklyn. In the unfortunate tradition of “We never asked…they never told,” nothing about what transpired in those first years was passed on to the next generation. So a century later, I found myself with those three big questions.

Circuitously, and with the help of people generous with their time and interest, posting one question on JewishGen’s Belarus SIG had led to answers to all three.

Jerry’s inquiry on JewishGen’s Belarus SIG was a key factor in his success. If you haven’t yet joined the Special Interest Groups pertinent to your research, we encourage you to do so. https://www.jewishgen.org/JewishGen/sigs.htm