Like the vast majority of JewishGen users, I have long been fascinated by my family history; my paternal grandfather Rolf Grayson and I often talk about his childhood memories and stories he had been told about our family’s history. I was able to discover a great deal about his mother’s side of the family by using Gesher Galicia and other resources. Using that database combined with resources from the LDS Family History Library, I was able to trace that part of the family back two hundred years—and some branches more than three hundred. Through historical newspapers, archives, and other resources, I was able to build up a more or less complete picture of my Galician family, complete with names, dates, addresses, occupations, and more. I even discovered that I have a rabbi, a Haskalah scholar, a Zionist pioneer, and a cubist painter in the family. I also learned that as upstanding citizens of our community, we had donated significant sums to support both the Austrian war effort in 1795 and rehabilitation efforts in the wake of devastating floods in 1845. Yet in spite of all of these impressive achievements for my grandfather’s mother’s family, my grandfather’s father’s family remained a complete mystery.

My grandfather never knew his father’s parents. Since they both died before he was born, and because his father had never been particularly close to them, that side of our family had long remained a mystery. My grandfather told me that his paternal grandfather Wolf Grajewski was born in Warsaw sometime during the 1860s and had sold cigarettes for a living (long before their harmful effects were known). He married a woman named Frieda Czak and moved from Warsaw to Germany in the 1890s: first to Berlin and then to several other cities before ultimately settling in Stuttgart. After Wolf’s death, his son Julius Grajewski moved to Munich where he married my great-grandmother. Yet where his branch originated from had long been lost to history.

JewishGen’s general database search has been extremely helpful to me in learning more about this side of my family—although only when combined with my own efforts at reading primary documents. When I searched for the name “Grajewski” in Warsaw, the only hit that looked promising was a marriage from 1894 between a Hirsch Grajewski and a Fraida Krzak. The names were similar enough to what I was looking for that I decided it was worth a closer look. Unfortunately, no other information was provided in the database; all columns other than the date and names of bride and groom were empty. The long-form document itself, uploaded in jpg form, was handwritten in old Russian cursive and was incredibly obtuse.

Luckily, I had spent a semester in college studying abroad in Moscow. Not only had I attained a significant degree of proficiency in Russian while there, but I had also studied Russian cursive handwriting. However, at first all I was able to read were the names of the bride and groom, which were written bilingually in Russian and Polish. I showed the document to Russian friends and international students from former Soviet countries, all of whom were stumped. Apparently I was on my own.

Undaunted by a challenge, I decided to seek out various genealogy resources for reading old Russian handwritten documents. I learned that in 1917 the Russian language went through a spelling reform which had eliminated several extraneous letters from the alphabet; I had not been taught the cursive forms of these letters when I studied in Moscow almost a century later. Additionally, prior to the spelling reform several letters had multiple handwritten forms, all of which were also eliminated in 1917. I studied Russian genealogy vocabulary lists, practiced with reading exercises, and experimented. After several months, I was eventually able to begin to crack the document. What I discovered was astounding.

The ability to read pre-Revolutionary Russian cursive writing turned out to be the key that unlocked the entire history of my grandfather’s father’s family. First off, I was able to find that Hirsch Grajewski had worked as a tobacconist—confirmation that this marriage document really was for my great-great-grandparents rather than people with similar names. Apparently, when my great-great-grandfather moved from Poland to Germany, he changed himself from a deer (Hirsch) into a wolf (Wolf). Already, I seemed to be learning about what his personality may have been like. After a lot of trial and error (more error than trial), I was eventually able to read the entire document. The marriage record gave absolutely everything, starting with the ages of both bride and groom (groom was 27, bride was 28). Even better, it provided the names of both sets of parents: Josek and Blima Grajewski, and Josek and Chana Krzak. Blima’s maiden name was recorded as unknown, but Chana’s maiden name is given as Kitmacher. The marriage record also gave Hirsch’s parents’ ages and street addresses for both sets of parents. 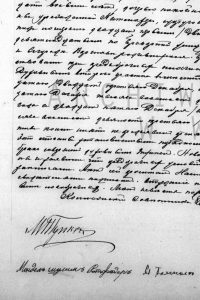 Excerpt from the Grajewski – Krzak Marriage Record of 1894; click here for full record

Armed with this information, I searched the database again. Now that I knew where and for whom to look, I was able to find a marriage between Josek Icek Grajewski and Blima Moszkowicz in 1865 in the town of Radziejow. Everything seemed to fit—first names, Josek’s last name, and the dates, so in all likelihood this must be the same couple as Hirsch’s parents. After learning Blima’s maiden name, I was able to search the database for the name Moszkowicz in Radziejow and found not only Blima’s birth date (1841), but also several other Moszkowiczes in this town—likely either her siblings or cousins. I found a record for her grave (Blima Grajewska, wife of Yosef Yitzchak) in Warsaw in 1895, which gives her father’s name as David. Although the original records for this town are missing and only the index is available, when I viewed Josek and Blima’s 1865 marriage record index at the Family History Library in Los Angeles, I learned that Josek’s parents were Gerszon and Rifke Grajewski and that Blima’s parents were David and Sura Moszkowicz. Blima had been living in Radziejow while Josek was already living in Warsaw at the time of the wedding.

On the Krzak side, I found a record for Josek Krzak’s death in Warsaw in 1875. By now I was able to read the original Russian records without much difficulty. From reading his death record I learned that he had been a soldier, that he and Chanah had two other surviving children in addition to Fraida, and that his father’s name was Mozhek. Searching in historical city directories of Warsaw using Logan Kleinwaks’s Genealogy Indexer website, I located a Zachariasz Krzak, who was listed at the same street address in Warsaw as given on Hirsch and Fraida’s marriage record; he must have been one of the other two surviving children at the time of Josek’s death. I also found a Gela Krzak who I believe was the other of Josek’s children.

Turning to Josek’s father Mozhek Krzak, I found that he had married a Scheindel Brant in the town of Warka (a market town about 30 kilometers up the Vistula from Warsaw) in 1828, had been born in 1804, and died in Warsaw in 1872. His parents were Solomon and Ita (born c. 1775-1785) and his maternal grandfather’s name was Moszek (born c. 1745-1765). From further entries in the database I found that Scheindel’s parents were Zelman and Rywka, and her maternal grandfather was also named Moszek.

Tracing the Kitmacher family forward in US census records using Family Search, I was able to follow them from Poland to California to New York and Texas. I found several living descendents and contacted them on Facebook. All of them have very interesting stories to tell; one of them even designed lunar landers for NASA!  They told me tragic stories about our family, many of whom suffered greatly during the Shoah, but also connected me with some of our relatives who are today living in France and Italy.

From knowing next to nothing about this branch of my family, I have very quickly discovered an astounding depth of information. Already an extensive family tree is forming, and it stretches back far beyond what I would have thought possible. Much remains to be done, but with a bit of luck, a large dose of patience, and some hard work (plus language skills) it is simply astounding what can be recovered from the depths of history.

Ultimately, genealogy is about more than uncovering names and filling out family trees. It is about understanding who we are, how we got here, and where we fit in the grand sweep of history. Recovering our lost roots can help us with our task, which is everyone’s: maintaining our Judaism as a personal, vital force in the world. It truly is a torch we inherited from the past and that we are destined to carry on into the future.

In combination with his ability to read primary Russian cursive documents, JewishGen’s Databases were helpful to Joshua in his research.

The resources of Gesher Galicia were fruitful for Joshua when researching his grandfather’s maternal side of the family.

Joshua made productive use of the LDS Family History Library.  Check this link to find a library nearest to you.

The Genealogy Indexer produced a number of pertinent records.

If you have documents that require translation, consider posting them to JewishGen’s ViewMate.