I think it is human nature to want to fill in the missing elements of one’s life space—especially family origins. It was most important to me to search for the origins of my father, Donald Victor Sarbach. I am of an age that early years didn’t include television, but I did devour my parents’ photo albums. From all those black and white photos, I recall vividly our road trips from our home in Ohio to Nebraska and surrounding destinations, homes of relatives of whom I never could understand how they were connected—especially with names like Nanny, Brother, and Mother. We planned our bi-annual road trips to include family members along the way who welcomed us to spend a night of our travels. Before our age of Interstate Highways, a drive from northern Ohio to Lincoln, Nebraska, in August was, in addition to being hot, at least a two-day adventure. As such, I had infrequent interaction with these people—our family. I recall having but four visits with my maternal grandmother, Ida May Boynton, and grandfather, Lowry Charles Wimberly, whom I’ve come to admire and love.

I wondered why we lived so far away from our family. I’m sure Dad’s job opportunity had a lot to do with it. Or maybe not.

Why I Got Started

In my middle years my curiosity got the best of me. Facts started coming to the surface that suggested I go further to figure out just how some of these fading images and memories fit together. Since this curiosity was before the advent of online genealogy, my research methods were derived from necessity. At the time, I was not interested in genealogy per se but simply to discover facts related to my father.

Born in Ohio, I was raised Protestant. My two sisters and I were baptized Methodist and, growing up, never wondered why our world was anything else. Later, as an adult, I converted to Catholicism. We are in our 70’s and 80’s now and, of course, our parents have passed. They grew up during the depression in Nebraska and my Dad’s prime professional life as a research chemist was during the Second World War years. Genealogy was of high visibility in Mom’s family. The Daughters of The American Revolution (DAR) credential collections were vast. But there was nothing for my Dad’s side of the family. A few disconnected names were all I had. We did have family Bibles with dutiful notations of names and events. Dad wrote many useful notes and I had letters from paternal uncles outlining family linkages, but nothing regarding religion. 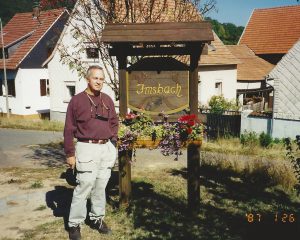 When I learned that Dad’s father, Meyer Leon Sarbach, spent his final days in a Masonic (also Jewish) home in Topeka, Kansas, and was buried in a Jewish cemetery in Leavenworth, Kansas, I began to wonder. I especially wondered why our family was Methodist.

My surname, Sarbach, is not common in the USA. I knew that most of the Sarbachs in this country were either rooted in Switzerland or in southern Germany and not related one to the other—the Swiss were typically Catholic or Protestant and the Germans were not. We did know if we had German or Swiss background. I had learned from my Dad that our surname used to have a double “a “—Saarbach—one of which was dropped shortly after our ancestors arrived in the new land. I then learned that the Sarbachs came to America from Imsbach in Bavaria about 1851.

I decided the mystery of my Dad’s heritage had to have a simple answer. Since there were relatively few Sarbachs in the US, I simply wrote all the Sarbachs listed in the online white pages a “hard copy” letter. The letter introduced myself and what few family facts—events, names, and relationships—I had. I asked that if they had any corresponding family facts, I would piece them together with mine and follow up with them. I sent in excess of 100 letters with self-addressed stamped envelopes. The kind and thoughtful responses started rolling in. All but one of the responses had no useful information. 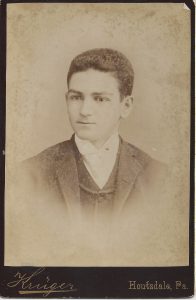 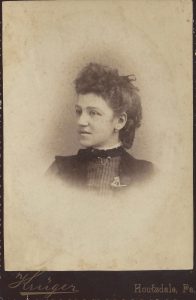 The response I received from Jack Honig said “Hi Doug, I’m your 2nd cousin and you are Jewish.” He proceeded to fill out my family with names, photos, extended family and a variety of data only he could have known. I now knew that I had a deceased Jewish Grandfather and a number of other Jewish family members only Jack could have known about. Jack’s own story was a blockbuster of intrigue and escape from the Nazi’s in the late 1930s—he lost close family members in the Holocaust—and he was my cousin!!  I’ll never forget my friend, Jack and his wife, Molly. I had the honor of sharing Seder with Jack and his family one year.

In 2014 I asked a tour guide in Prague what was the Nazi criteria for being labeled a Jew. He said, “…having one grandparent who was Jewish.”  My Dad’s father was Jewish, a child of Jewish German immigrants. Therefore, my sisters and I would have been considered Jewish by the Nazis. So why did my Dad not speak to his Jewishness and why did my Protestant mother go along with the story? Why did no one in Ohio suspect our Jewishness whereas those in Nebraska and Kansas all knew?

Dad was a scientist and Mom, Ruth Lucile Wimberly, was a child of a respected English professor at the University of Nebraska. Both were schooled in higher education. They were informed of world events of the 1930s and 40s. Dad was involved in developing synthetic rubber so that the Japanese could not hold the world hostage for the lack of natural rubber—he succeeded. I believe that Dad and his scientist circle of friends and co-workers feared for the outcome of the War in Germany and the destiny of their children. Dad had a special concern. Indeed, our nation was fighting for its life and I think Dad was protecting his family from possible internment or worse. 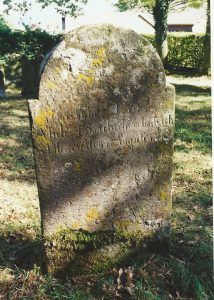 An explosion of data followed from Jack, from some of his friends, and from information I gathered through Ancestry.com. I learned of my Jewish Great-Great Uncles and names I had never heard of before. I learned of hardships which drove all my family to safety elsewhere, and then they returned as mercantilists, civic and political founders, and established their lives in the prairie town of Holton, Kansas Territory.  New surnames became connected; Lehman, Friend, Gruenebaum, Mayer, Lazarus, and others. JewishGen was helpful to me in finding others who were researching the same names I was researching.

At that time, I had found what I wanted about my father’s family. I went no further with genealogy for many years. Later I returned and now have over 11,000 names on the family tree for my wife’s and my families. It’s all for the children.

I still have many questions.

In searching for his father’s roots, Douglas sent more than 100 letters via U.S. mail to everyone in the online white pages with the surname of Sarbach. One response, from a previously unknown second cousin, was the breakthrough he needed.

Ancestry.com proved helpful in finding vital records and other information.

Douglas used various resources of JewishGen to find others who were researching the same surnames.