All I ever knew was that I am named Eli Moshe (Eli Moses, Hebrew name Eliyahu Moshe) after my great-uncle Moshe. Moshe died in a motor accident, six weeks before his planned wedding. The date of his death was unknown, but it was sometime between the late 1920s and early 30s. That was the sum total of my knowledge of Moshe until a photograph given to me in 2011 changed everything.

I first become interested in genealogy in 1992 when a cousin jotted down, on a piece of scrap paper, seven names of my paternal ancestors. From that, I discovered my connection to the rabbinic Katzenellenbogen family tree through my great-great-grandmother, who appears in Neil Rosenstein’s book, The Unbroken Chain. A second boost came in 2001, when a Hungarian politician made contact via Saul Issroff in London, resulting in some unusual revelations about my maternal side, including two secular Muslim second cousins living in Istanbul, who actually are halachically Jewish.

My zaide (grandfather) Nachum Mendel Rabinowitz, was born in 1887 in Orla, a small Polish village in the Grodno district near Bialystok. His original family name was Skarasjewski, but he changed it to Rabinowitz to escape being drafted into the Russian army. In the early 1900s, Zaide left for Brest-Litovsk where he studied at the Brisk Yeshiva under Rav Chaim Soloveichik. Nachum Mendel then traveled to Palestine, married Chana Cheshe Miriam Herison in 1905 and migrated in 1911 to Volksrust, a “dorp,” a small rural town in Transvaal, South Africa. My dad, Zvi Hersh (Harry) Rabinowitz, was the first of his family to be born in South Africa in 1914; his two older brothers were born in Palestine. By 1919, the family had moved to Cape Town, where two sisters, Rachel and Sarah, were born: Sarah, the youngest, in 1927. The family was joined by Nachum Mendel’s younger brother, Moshe Zalman in 1921, and later by his sister, Chana.

On 8 November 2010, a Polish researcher, Wojciech Konończuk of Warsaw, made contact after seeing my post on JewishGen’s Family Finder. His family also came from Orla, the same shtetl as my grandfather. Although not Jewish himself, Wojciech was writing a book on the Jews of Orla. There is no Yiskor book for Orla, so I volunteered to write and manage the Orla KehilaLink for JewishGen, the first of my 70! In May 2011 I visited Latvia, Lithuania, Poland, Hungary and Turkey, all for the first time.

On my return trip home to Australia, I visited my last surviving aunt, Sarah Stepansky, in Jerusalem. Sarah gave me a photograph as a reward for my enthusiastic interest in our family history; I was the first of my family to make the journey back to Orla in more than 90 years. It was a school photograph with the words Orla Folk School II in Yiddish on the front and 1920 written on the back. Aunt Sarah identified my great-uncle Moshe as the teacher in the bottom left of the picture. 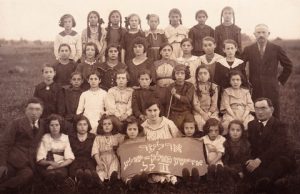 I scanned the photograph on June 7, 2011, and e-mailed it to family members and to Wojciech. On July 25, 2011, Wojciech wrote that he had received a photograph from “Mary,” a researcher in London. Mary is researching the Lacki and Lichtzier families, also from Orla. She sent him the photograph because it has Orla on a banner in the picture. Mary does not know the names of the people in the photograph but, upon seeing it, Wojciech immediately recognized the teacher in the top left as Moshe Rabinowitz, the same person in the photograph I had sent him the month before.

The puzzle about my great-uncle’s life started to fall into place when Wojciech told Mary that the man’s name was Moshe Rabinowitz. She responded that a Moshe Rabinowitz from Orla was engaged in South Africa to Paula (Polly) Lichtzier from Orla, a member of the families she was researching. Mary added that Moshe was killed in a motor accident six weeks before his planned wedding to Paula.

I contacted Mary who provided the name and address of Ray Hengy who lives in Freiburg im Breisgau, Germany. Ray is the daughter of Paula and Joe Pinn, the man whom Paula subsequently married, sometime after Moshe’s death. Ray also sent me a series of photographs including several of Paula with her late fiancée’s family. It was somewhat eerie to receive photographs of my family from a stranger in Germany. Ray also provided details of what she knew about Paula and Moshe. Apparently, Ray’s mother, Paula, maintained a close relationship with Moshe’s family in Cape Town after Moshe’s tragic death. Hungry for more details, I accessed the memoir of Paula’s late cousin, Sylvia Kaspin, sent to me by Wojciech, who received it from Mary. See excerpt here:

By now, my aunt Sarah had also published her own memoir, including this excerpt:

About a year after Avraham Yaakov left Orla to go to Israel, his son, Moshe, went to South Africa. He had already studied English by himself in Russia, so the language was not a problem for him. He studied bookkeeping at the University of Cape Town in three months and became an accountant and was also a teacher. He had been engaged to be married to Paula (Polly) Lichtzier, but, tragically, six weeks prior to his marriage he was killed in an accident. I remained very close to his fiancée. When I was getting married, it was Polly who sewed my wedding gown, sight unseen, to a perfect fit, and sent it with my parents, who came from South Africa to the kibbutz for my wedding.

In May 2012, I met Ray and her husband, Heinrich, in Warsaw, and together with Wojciech and my wife, Jill, we traveled to Bialystok, Orla and Treblinka. Ray showed me something she was wearing. It was the engagement ring that Moshe had given to her mother. Ray wears it on special occasions. The ring was treasured by her mother throughout her life as a physical memory of Moshe. 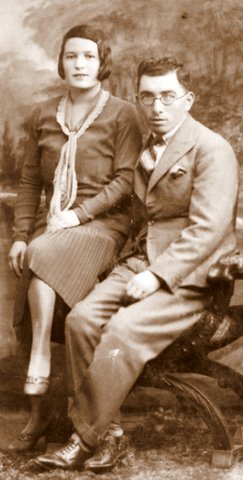 In May 2013, I visited Ray and Heinrich in Freiburg. We looked for more pictures of Moshe and Paula and found a framed photograph of them on the wall. I was, however, still missing dates and details of the circumstances of Moshe’s death. I asked two of my cousins if they had any further information and they provided one clue. They remembered that their dad, my uncle Isaac, recited the mourner’s kaddish for his uncle Moshe each year on the second last day of Pesach. I checked the website of the Cape Town Jewish Cemeteries Maintenance Board for any deaths or burials in Cape Town with the name Moshe Rabinowitz or similar. I found a Morris Rabinowitz, but for some strange reason, the date was shown as “-0001.” The information I was seeking was missing.

I called the Cape Town chevra kadisha (burial society) and was given the date of September 4, 1931, which is nowhere near Pesach on the Hebrew calendar. I checked my iPhone’s Pocket Luach, transposed the date 4/9/31 to 9/4/31 (9 April) and voila! It is the second to last day of Pesach in 1931.

I called the chevra; they found their error, updated their database and gave me the correct details and the location of the grave: Woltemade/Maitland Cemetery (Gate 8). Those who know Cape Town will tell you that it is not safe to visit this cemetery alone. Accordingly, the chevra assigned a security guard to accompany me. I took photographs and had the inscription interpreted by my cousin, Hadara Boczko, daughter of Sarah. Now armed with a date, I asked Jocelyn and Tammy at the Gitlin Library in Cape Town to be on the lookout for any articles around this date. This library has an excellent collection of old Jewish newspapers bound in folders. Jocelyn found a report in the SA Jewish Chronicle from April 1931.

Jocelyn and Tammy suggested that I visit the National Library to check the microfilms of the two local newspapers, The Argus and The Cape Times. I found the accident reports and also located the death notice and other legal documents at the Western Cape Archives. 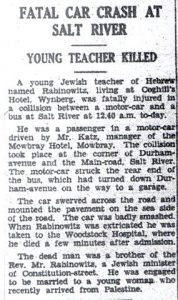 In possession of other vital details that allow me to follow up, I visited the scene of the accident, 82 years after it happened.

Wanting to search further and keen to connect with descendants who might have more to contribute, I met Paula’s extended family in New York, Toronto and Israel: Robby Gordon, Glenna Gordon, Rose Kamnitzer and Michal Itzhaki.

Rose Kamnitzer in Toronto has a collection of family photographs from her parents, Berl Lacki and Bella Lichtzier, Paula’s sister. Berl was Moshe’s good friend. They corresponded by postcard after Moshe arrived in South Africa in 1920 until Berl arrived in 1929. These photographs in Rose’s collection were taken in Poland and South Africa and are special in many respects. They were safely kept in a drawer in Toronto and only came out when I made contact with Rose. Only by being together, were we able to identify our respective families in the photos. See some of these photos here.

My journey of discovery, starting with a photograph given to me in Israel, has taken me to Germany, South Africa, Poland, the United States, UK, Canada and back to Israel, with updates to my research findings in each destination. It was the subject of my lecture at the International Association of Jewish Genealogy Societies (IAJGS) conference in Jerusalem in July 2015, and at subsequent venues and presentations in South Africa and Australia. But my search isn’t complete. The details of the driver of the vehicle in the fatal accident are still of interest. The newspaper cutting tells us that Mr. Katz, the driver of the vehicle in which Moshe was a passenger, was the manager of the Mowbray Hotel. I have tried accessing the archives of the company that once owned the hotel and the bus company most likely involved in the accident and have consulted various Cape Town historians. So far, I have struck out on these. I am still hopeful that more leads will come my way. And so, to be continued.

(STOP PRESS – Mr. Katz’s family has just been found. The story will follow.)

Slightly different versions of this story have been published in:

Eli posted the surnames and towns he was researching on JewishGen’s Family Finder (JGFF). Because of this posting, he was contacted by a researcher who had key information regarding great-uncle Moshe. If you haven’t already posted the surnames and ancestral towns you are researching on JGFF, we encourage you to do so. https://www.jewishgen.org/jgff/

Libraries were excellent resources for Eli, where he found microfilms of old newspaper articles regarding his great-uncle’s fatal accident and a helpful book regarding the Wynberg Jewish Community.

Additional information and images regarding this story and other genealogy projects of the author can be viewed at the following links:
• Blog: http://elirab.me/
• Website: http://elirab.com/Moshe_%26_Paula_Online.html#5
• Facebook: https://www.facebook.com/mosheandpaula/
• Litvak Portal: http://elirab.me/litvak-portal/moshe-paula/