For family historians and genealogists, it usually begins and ends with the vital records: birth, marriage, death. As we all know and appreciate, thanks to the efforts of hundreds of volunteers, archivists, and skilled translators and researchers, a number of wonderful websites today make researching our families easy and accessible from the comfort of our living rooms and workplaces. These include JewishGen, JRI-Poland (Jewish Records Indexing Poland), Gesher Galicia, Israel Genealogical Research Association, Ancestry, GenTeam, GenealogyIndexer, Rohatyn Shtetl Research Group, to name a few.

While recognizing the important place that vital records play in reconstructing a family lineage, this article aims to highlight the crucial role that secondary sources such as testimonies, memoirs, and survivor and witnesses accounts can play in emotionally connecting us to our ancestors. For  many of these individuals, we may have zero photos or very little vital information that is precise, uncontested, and reliable. It is sometimes only through these secondary sources that the little details of an individual can be learned.  “He had a beautiful singing voice”; “she had bright red hair”; “he loved animals”; these kinds of details—not present in the “hard” data—humanize our ancestors and breathe life back into what is otherwise merely a name on a record.

Our work in my ancestral town of Rohatyn and with other Jewish descendants has led us to amass a large amount of information, photos, and data about people and buildings. Through my personal collecting of witness accounts, Yad Vashem testimony, and survivor memoirs, I am working to associate a family member with each surviving Rohatyn building, and by doing so – by layering the “soft” secondary sources over the “hard” data – reconstruct prewar Jewish Rohatyn and rebuild memory.

I begin with three buildings, still standing today, that were owned before the war by David and Jonas Horn, brothers of my great-grandfather Isak Horn.

Jonas Horn was born on vul Valova in Rohatyn on April 13, 1898. His parents were Jozef Osias Horn of Rohatyn and Rifke Kurzrok of Kozowa. Jonas was one of nine children: he had six sisters and two brothers. His oldest brother Isak immigrated to America in 1914.  Jonas had dark hair, and was a very private, reserved gentleman, much admired in the Jewish community.¹

At age 23, Jonas married his cousin Ester Malka Liebling (“Amalja”) of Kozowa, and together they had three children (two boys and a girl). Jonas ran a restaurant and tavern with his father Jozef  in the building next to the Roman Catholic Church (on what was then called Pilsudskiego Street), and lived upstairs with his family.² Jonas’ younger brother David was also a partner in the restaurant at this location. In 1932, Jozef and David were the official representatives of Lwow Breweries in Rohatyn with telephone number 11. 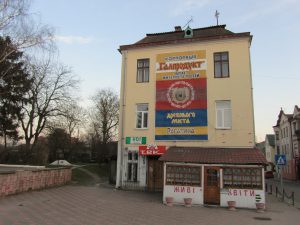 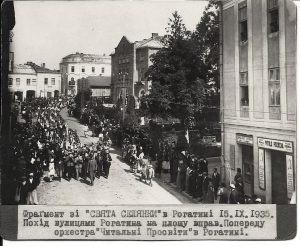 On the third floor of Jonas’ building also lived Willy Halpern and his parents; on the second floor was the dental office and residence of Dr. Stern.  A Polish woman named Mrs. Pocicha ran a meat and sausage shop on the ground floor.³ 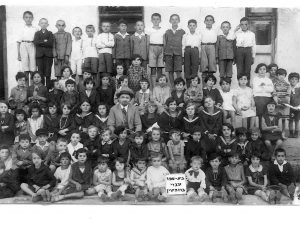 Jonas’ restaurant was very popular with Ukrainians and Poles who would go there after work and “on Sunday, Saturday night or the long cold winter nights.” Jews also came to the restaurant to eat and drink, even if only a few times per year in connection with a Jewish holiday such as Purim, a wedding, or some other celebration. Many business deals were negotiated and completed at Jonas’ restaurant “over a glass of whiskey and a piece of roast goose”.4  At the cashier was a Jewish pushke (“charity box”) where Jewish patrons could donate money to Jewish causes such as Kollel Galicia Yerusalayim in Palestine.5  The restaurant also conveniently had a small outlet at street level for selling fresh baked bread from David’s bakery, located across the rynok (market square). The fresh bread was passed through a window to interested customers on their way to work, school, or home.

Jonas’ son Izio, born in 1925 was a good student. He had a private tutor who remembered that Izio used to bring her fresh, warm bread from his uncle David’s bakery.6   Izio also attended Hebrew school in Rohatyn, taught by Mr. Edelstein who was much beloved in the Jewish community.

In August 1941, the Nazis forced all of Rohatyn’s Jews to relocate to the Jewish ghetto (an area behind the Ukrainian Church), and Jonas was designated a member of the Judenrat (Jewish Police). He served alongside Shlomo Amarant, Shlomo Kreisler, Chaim Skolnik, Lipa Mandel, Pinchas Spiegel, Dr. Goldschlag, Dr. Freiwald, Dr. Rosenstein, Dr. Gotwort, Feivel Hochberg, M. Katz, and M. Weissbraun.7 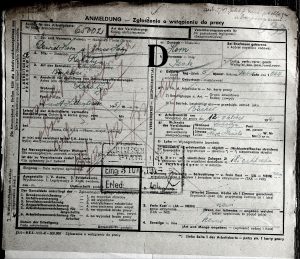 In October 1941 Pilsudskiego Street was renamed Hitlerstrasse. The restaurant’s address became Hitlerstrasse 57, and on October 12, 1941 Jonas’ son Izio was forcibly recruited to work at uncle David’s bakery on the rynok; the bakery had been appropriated by the Nazis to supply bread to the Judenrat and Jewish ghetto.8  Shortly thereafter, Izio ran away from Rohatyn and hid. He was discovered and forced to walk bare- footed in the snow back to the police station in Rohatyn, where he was shot and killed. Izio was 16 years old.9

On June 6, 1943, the Nazis executed all the members of the Judenrat, including Jonas.10

It is not known when or where Amalja and the two other children were murdered.11

David Horn was born on vul Valova in Rohatyn on July 6, 1899. His parents were Jozef Osias Horn of Rohatyn and Rifke Kurzrok of Kozowa. David was one of nine children: he had six sisters and two brothers. His oldest brother Isak emigrated to America in 1914. 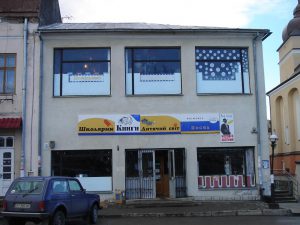 David owned a bakery with his father next to the Ukrainian Church on the Rohatyn rynok. The bakery was very popular and many Jewish Rohatyners remember how delicious the breads were; children at school always wanted to sit next to David’s daughters who shared freshly baked breads and rolls with their friends.12 The bakery had a state-of-the-art roll-making machine bought by David in Vienna which produced 1000 rolls per hour.13 The bakery also sold pastries which were a favorite especially with Rohatyn children.14

Across the rynok next to the Roman Catholic Church, David’s  bakery had a small outlet shop, operating out of the restaurant run by his older brother Jonas. In 1935, David had a Polish business partner in this outlet: Czyżewski Frańciszek. When he was old enough, Jonas’ son Izio worked for his uncle David as a baker.

David and Bronia Horn also owned a second bakery in the nearby village of Pidhoroddya
(then called Podgrodze).15

In October, David’s bakery was appropriated by the Nazis. Its function became to supply bread to the Jews in the ghetto.16

At age 26, David Horn married Bronia Hornstein of Honoratowka (Rohatyn District), a woman five years his junior. Bronia had been an actress with Jewish theater troupes that played across Galicia, including Krakow and Lviv. She was considered one of the most elegant and beautiful women in Rohatyn, and David worshipped her.17 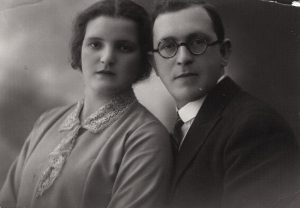 David and Bronia had three daughters, Regina, Malka, and Devora. In 1928 the family of five, together with the children’s Polish nanny, vacationed in Iwoczynia (today called Iwonicz-Zdrój in Poland), a favorite resort for many Jewish families of Galicia. 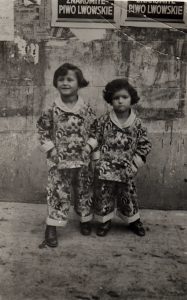 David and his family lived on Pilsudzkiego Street. The Jewish lawyer Mr. Kleinberg also had his law office on the ground floor of this building with his residence on the second floor.18  Guests who stayed at David and Bronia’s house remember the “beautiful smell of the lilac” tree that drifted in summer through the windows from the garden in the rear.19

In 1930, David was a council member within the
Rohatyn Jewish community.20

David and his family lived very comfortably, and David was able to pay the tuition of his older sister Jute (who became a dentist) and his younger sister Bronia (who became a teacher of German language and literature), both of whom studied at universities in Lviv, Vienna, and Krakow.

David’s oldest daughter Regina was an excellent student and had aspirations of someday also attending university. Her mother grieved years later when quotas were imposed on the number of Jewish students accepted to Rohatyn’s Polish high school. Regina was not among them, despite taking the entrance examintion twice and passing “with distinction.” 21 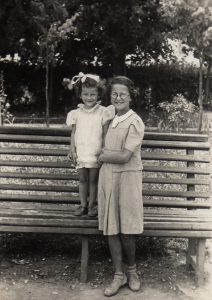 In October 1941, the Nazis appropriated David’s bakery, and sometime later, possibly in 1942, David was killed inside the Jewish ghetto. He was shot without warning when he tried to protect his sister’s son M. Leibling, being attacked by Nazi officers. David was 42 years old.22

Bronia fled from Rohatyn, taking her daughters Regina, Malka, and Devora with her. Their goal was to hide in the woods and join the partisans.23  But hunger and difficult conditions made survival impossible, so they secretly went back to Rohatyn and hid in the basement of their former home on Pilsudzkiego Street. Hearing rumors that there were Jews in hiding, the Nazis issued a false announcement that they were willing to exchange Rohatyn Jews for captured German soldiers held in England. Believing this, Bronia and her daughters surrendered themselves to the Nazi authorities.24 Witnesses to the event recalled that Bronia held her head high and walked like a queen to death, hand-in-hand with her daughters, quietly reassuring them that “it won’t be long now”.25  Bronia was 38 years old, Regina was 17, Malka was 15, and Devora was 9.

The basement of the Horn home, now vacant, then became the hiding place for
20 year old Rosette Faust.26

Rosette survived the war, emigrated, raised a family, and lived into her 90s. Rosette passed away in Maryland in 2017. 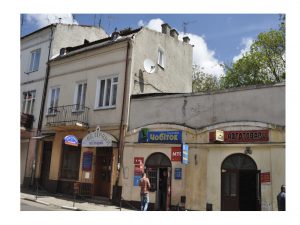 20  Correspondence and minutes of the Rohatyn Jewish community, Ivano-Frankivsk archive

Marla Raucher Osborn is a former California attorney, now Chief Executive Officer of Rohatyn Jewish Heritage, a registered Ukrainian non-profit NGO based in Lviv. Marla’s beloved paternal grandmother was born in Rohatyn to a Jewish family who had lived there for generations. For more information about the work of Rohatyn Jewish Heritage, go to the website at: http://rohatynjewishheritage.org/en/

Many resources are listed in the above Footnotes to this story. In addition, resources include: