I was helping a friend from the Board of Directors of the Jewish Genealogical Society of Greater Boston (JGSGB), Sonia Lipetz, to identify her great-grandfather’s town of origin, since extensive research in all the usual places had yielded only a frustrating “Russia.” She had some sense of the name, from oral reports, but couldn’t pin down the right location. I tried the unusual places, with no great success, though I did narrow it down on one document to a more localized “Kiev.” 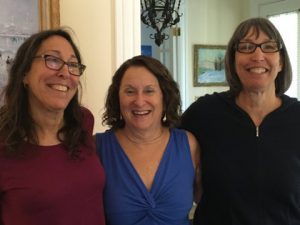 Reunion of Sonia (center) with cousins Nancy and Laura, August 2017

One day she casually mentioned to me that she had once heard, but never seen, that her family name, which I had been searching for, Lipetz, might have been Lipevetsky. The first thing I did, as I tell all new researchers, was to go to the JewishGen Family Finder (JGFF), where I promptly found three things: the correct name, the correct town (Khoshchevatoye, now part of Ukraine), and a researcher who turned out to be her third cousin! It was an absolute lock: Laura Nelson’s great-grandfather, Max Lipevetsky, was headed on his ship passenger manifest to his brother, Sonia Lipetz’ great-grandfather, Mordechai, in Newark!

Another match: Sonia’s brother’s DNA was a close match to a hitherto unidentified “Mr. Nelson.” Laura’s sister, Susan, lives in the same city as Sonia; Laura came from California, and the three newly minted second cousins had a “reunion” in August.

Carol demonstrates how JewishGenners often help each other in our research. She met with success when she searched on a variation of Sonia’s surname. As our ancestors emigrated, individuals from the same family sometimes adopted different versions of their surnames, so this is an important factor to keep in mind when searching for old records and family connections.

Through JewishGen Family Finder (JGFF), Carol found not only the correct name of the town, but also connected with previously unknown cousins of Sonia. If you haven’t yet listed your ancestral towns and surnames on JGFF, we encourage you to do so.
https://www.jewishgen.org/jgff/

Locating the ship passenger manifest was key to confirming the relationship. Manifests can be found at the Ellis Island Foundation website https://www.libertyellisfoundation.org/passenger or via links on various genealogy websites.

JewishGen’s Ukraine Special Interest Group (SIG) has a page of information regarding Khoshchevatoye, as well as various projects pertaining to the town.
https://www.jewishgen.org/ukraine/GEO_town.asp?id=239

**Yad Vashem has a page regarding the Jewish victims of Khoshchevatoye and photographs of the various memorials that have been erected in their memory, including the above photograph.
https://www.yadvashem.org/untoldstories/database/commemoration.asp?cid=861