I began my family genealogy project in 1984 with the purchase of my first computer, an IBM PC. My parents were still alive and were able to help me construct the matrix of both sides of our family. I prepared a form letter I sent to all family members seeking information. After a few years of research, my work then lay dormant for the next 20 years. I’d like to think I was waiting for the Internet to catch up to my needs.

I retired in 2005 and reentered the world of genealogy, but now I was all in. Fortunately, there were websites, databases, and genealogical services (JewishGen, Ancestry.com, Jewish Records Indexing – Poland, LSD Family Search, GenTeam, US Holocaust Memorial Museum, Yad Vashem, Jewish Historical Institute), and professional genealogists, which have become invaluable to me and others like me. One by one, I researched the names in my database and extracted as much information as possible. I posted my family surnames on JewishGen’s Family Finder. Also, at the same time, after comparing the different products available, I acquired genealogy software, My Brother’s Keeper, which I used to organize all the data, documents, photos and personal notes on my family. Of note, for many Jews researching their roots, a Jewish genealogy project is made much more difficult because of the loss of life and data as a result of the Holocaust.

My father’s family came from the Stanislawow, Poland (now Ivano-Frankivsk, Ukraine) region. His father, Issac Diamant, moved the family to Vienna, Austria, in 1914. However, my father’s mother’s family, the Weissbergs, stayed in Stanislawow. My paternal grandmother’s father was Selig Weissberg and Selig had a brother, Meir (Max) Weissberg. 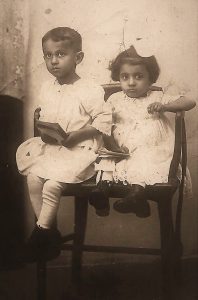 Meir was a well-known Judaic scholar and eventually returned to Stanislawow from Vienna, teaching languages at a local high school. I know little about Meir and have only one photo of him. From documents I’ve received from the Ivano-Frankivsk archives, I’ve managed to obtain more information about the Weissbergs. Meir and his wife had four children, two boys and two girls. Both Weissberg daughters married, but only one, Frydryka, had children. She and her husband, Alexander Aleksandrowicz, had three children, Lidja (born 1915) and twins, Norbert and Irena (born 1917). Through the IKG in Vienna (Israelitische Kultusgemeinde Wien), I was able to determine that all the Aleksandrowicz children were born in Vienna, but eventually returned to Stanislawow, after a short stay in their father’s hometown, Bielsko-Biala, Poland.

And now the trail became very cold. I had hit the wall. In 2015, I submitted a brief family biography to the JewishGen Discussion Group, specifically looking for any information about any of the Aleksandrowicz children, my father’s second cousins Lidja, Norbert, or Irena. If there were a chance of living relatives from this side of my family, it lay with the Aleksandrowicz children. I had gone as far as I could go, even after hiring researchers in Poland and Ukraine.

In January 2016, I received an email from a man named Lucas in Poland. He had read my family description in the JewishGen Discussion Group, recognized the name Norbert Aleksandrowicz, and thus began a wonderful relationship. Lucas spoke only a little English but, with the aid of Google Translate, we were able to communicate. 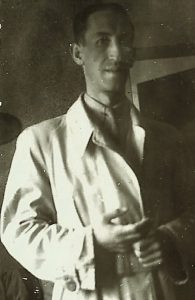 It was Lucas’s grandmother who had saved Norbert’s life. She found Norbert hiding in the utility room of her Stanislawow farm, hiding from execution, from certain death. She told Norbert he could stay and she hid him on her family farm for three years, at great danger to herself, and thus allowing Norbert to survive. In 1945, Lucas’s family and Norbert were resettled in Klodzko, Poland, where Lucas, his father, his grandmother, and Norbert continued to live.

I had a million questions and Lucas had most of the answers, in addition to photos from Norbert’s youth and as an adult. Lucas described Norbert as his adoptive grandfather and a nice man, easy to talk to. Norbert died at age 90 of natural causes in 2007, after a successful career as a banker, like his father, Alexander. Sadly, Norbert’s entire family, including his twin sister Irena, were murdered by the Nazis. Norbert never married.

Slowly, slowly, clues, which helped to build a picture of Norbert’s persona, were emerging. One such clue was a “relative” named Gustav, who arranged to sponsor Norbert’s immigration to the United States (c1945), but Norbert refused, citing his gratitude and loyalty to Lucas’s grandmother and father in Klodzko. Using Ancestry.com and Google, I was able to locate the son (age 82) of this “relative” Gustav, who now lives in California. He told me he was about 10 years old when his father, Gustav, told of trying to bring a relative from Poland to the United States. Even though Gustav’s document claimed Norbert was a relative, my research tells me different. With the assistance of Gustav’s son and family, I continue to explore this aspect of Norbert’s life.

Lucas also revealed that in Klodzko there was a videographer, Nik, who was a friend of Norbert and very interested in Norbert’s story. Nik travelled with Norbert to Stanislawow, recording Norbert’s thoughts and saying Kaddish at the cemetery in Stanislawow.

And to think, all of this was the result of a short family biography posted on the Discussion Group of JewishGen.

Prior to the advent of the Internet, Michael sent a form letter to his family members seeking information about the family’s history and genealogy. This information proved very helpful to his future research.

Michael’s breakthrough came from a brief family biography he posted on JewishGen’s Discussion Group, which was read by a man in Poland who had known his father’s cousin Norbert.  https://www.jewishgen.org/JewishGen/DiscussionGroup.htm

Other resources used by Michael included: