An era draws to an end. Time is running out for parents and children and brothers and sisters who were torn apart by the Holocaust to actually be reunited. Cousins and other relatives will continue to find each other, but those occasional stories of amazing connections we used to hear about are coming to a close, due to the age of those involved.

In early June of this year, I posted a request on the JewishGen Discussion Group digest for assistance in locating a missing person to reconnect her with some of my family. Now, I am at liberty to share the back story and how this puzzle was miraculously solved after 75 years. First, get a box of tissues. 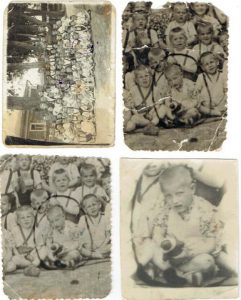 A little girl was left by her Jewish parents in a non-Jewish orphanage in Russia in 1941 at the age of two. In 1945, neither parent knew that the other had survived the war. Her mother came back for her, but her father was locked away in a gulag in Siberia for eight years. By the time he reached the orphanage, the girl was gone. In the meantime, the mother, not knowing that the father had survived, remarried and the girl took the name of her adopted father. Eventually, they all made Aliyah, settling in Karmiel in the late 1950s. Her father spent the next 50 years searching aimlessly for his little girl, with only a tiny frazzled group photo of all of the children in the orphanage including his daughter. Of course, his efforts were in vain, since she had changed her name, and there was no way for him to have known this. In 1991, the father together with his son and his grandchildren from his second marriage, made Aliyah, settling in Haifa.

Meanwhile, the father continued to search for his daughter with the hope that just maybe she had made Aliyah, not knowing until his dying day in 2003, that she lived no further than a 10 minutes car ride away.

This is where I enter the picture. I made Aliyah in 1997, and I lived in Israel for five years. During that time, I took advantage of the Yad Vashem archives to locate family members whom I had never met, but was able to find through their Pages of Testimony. I found my cousin Josef (Yosef) Fernand, born in Lublin, Poland, who at that time must have been in his late 80s. I drove to Haifa to meet this new-found family. I must admit that I had very little in common with these new immigrants. I did not speak Russian, they did not speak English, neither of us spoke Hebrew that well, but with the choppy English that his little 12-year-old grandson Maxim understood, together with my broken Yiddish and all of our broken Hebrew, we were able to get by. Yosef explained to me his heartbreaking story about his daughter, Yaffa. He took me in his bedroom and showed me the large collage photo made from the tiny frazzled photo of Yaffa that he had carried with him all those years hanging above his bed—the last thing he saw before he closed his eyes each night. I could offer little help, unfortunately. At the end of the meeting, we said goodbye and I returned to Jerusalem, never to hear from or see them again. 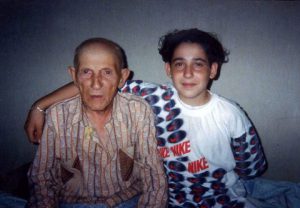 Fast-forward twenty years to 2017. I receive a “friend request” on Facebook from the “little” 12-year-old grandson Max, my cousin, who is now 32 years old. He told me about the impression and impact I left on him as a child so many years before, that it made him aware for the first time that he was part of a larger picture. He grew up only with his grandparents, parents, an uncle and one brother—no cousins, no extended family. He said that I made him aware that he was part of a BIG family—a People. Max went on to tell me that while some people’s lives ended in Poland in 1945, he had decided to begin his new life in Poland by attending a reunion of descendants of families from Lublin this summer with his fiancée. I told him I planned to attend that same reunion.

Max told me that his grandfather Yosef had died in 2003. Then he told me some startling news. Because of the spark I lit in him about searching for family, he made it his personal task to find the lost daughter for whom his beloved grandfather had searched for so many years. He eventually found his way to the Jewish Historical Institute in Warsaw, where through their research, they were able to discover the name of the mother’s second husband, the girl’s married name, and even the address in Karmiel and a phone number. The problem—the phone number no longer worked and she was no longer at that address.

This young cousin now turned to me, “You are the master. Can you work your magic? Can you help me find her?” That is when I posted my note on JewishGen’s Discussion Group digest looking for help in Karmiel, Israel. While nearly 20 people contacted me to generously offer their assistance, one of the first ones to do so was a very kind attorney in Karmiel, whose partner is Russian. No sooner had I provided him the information (without the entire back story—only the fact that I was looking for this lady) did he respond that not only could he help me, but this exact woman was his client whom he represented in the purchase of her flat 30 years ago, and with the sale of her flat last year. He told me that she had moved into a retirement home, and that he had already spoken with her son, Shuki, who would be happy to speak with me to learn about why I was searching for her. He gave me Shuki’s telephone number.

I quickly picked up the phone and my fingers fumbled as I pushed the buttons. A deep voice answered the other line. I explained that I am a genealogist, and I have been researching our mutual family lineage for about 45 years. I explained to Shuki about how we were related through his mother’s biological father, of whom he knew almost nothing except for the family name. I told him that he was part of a rather large extended family of which he was unaware. We had a very warm and jovial conversation. Then I asked him if he was sitting down, and he sounded confused. “Why should I sit down?” I told him, “Just sit down for a moment.” He replied, “OK—I’m sitting.” I said, “You know your grandfather who passed away in the Shoah? The one through whom we are related? He did not die in the Shoah. He survived. He came back to the orphanage to look for your mother. She was gone. He assumed that his wife had been killed in the Shoah, but he continued to search for your mother for many decades. He made Aliyah in 1991 and he lived right here in Haifa until he passed away in 2003.”

There was a silence on the other end of the phone. Then “Ma ata omer??? (What are you talking about?),” he gasped. I continued. “And your mother has two brothers that she has never met, and they have children, and they are all eager and anxious to meet you all and to try and build a relationship—to catch up on a lifetime of missed opportunities. It’s not too late. Are you interested? Can your mother handle this news at the age of 78?” His answer was an immediate “OF COURSE!! B’VADAY!!!!!” Shuki told me to have his new cousin Max get in touch with him as soon as possible—there was no time to waste. 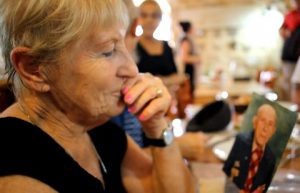 Yaffa’s first look at a photo of her father, Josef. Israel, June 2017

I called my young cousin Max and told him the news. He was speechless. Within one hour, he had already arranged a four-way conference call between himself, his father, his new cousin Shuki with whom I put him in touch, and the new cousin’s sister. After a very warm and excited telephone conversation, they all agreed to convene their families together on the approaching Shabbat, to all meet for the first time, and for Yaffa and her “little brother” whom she has never met to look at each other and marvel at this miraculous opportunity that they have been given to get to know each other at this stage in life.

On Shabbat, my young cousin Max gave his aunt Yaffa a very special gift—that precious photo collage of her as a little girl that hung over his grandfather’s bed for so many years.

In June of this year, I met with my cousin Max and his fiancée at the reunion of descendants of families from Lublin, Poland.

This is all due to the wonder of JewishGen, and the many kind and generous people who give of their time and resources to change lives and make miracles happen.

Thank you, JewishGen, and God bless you all!!

[Note: Meyer Denn shared a slightly different version of this story on the JewishGen Discussion Group and on Facebook in June 2017. He can be contacted at meyerdenn@yahoo.com.] 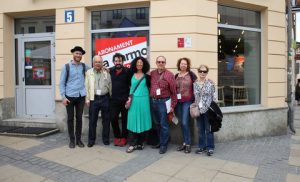 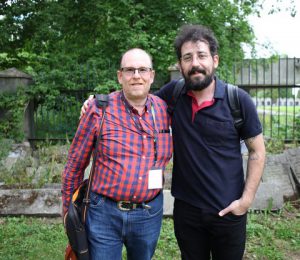 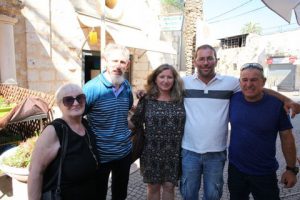 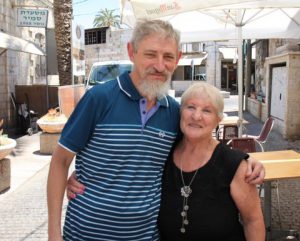 While in Israel, Meyer searched the Vad Yashem archives for family members among the Pages of Testimony — and found a cousin, Josef Fernand, living in Haifa. While visiting Josef and his grandson Max, Meyer learned of Josef’s missing daughter, Yaffa.  http://www.yadvashem.org/archive

Max found the name of Yaffa’s mother’s second husband and an old address in Israel through the Jewish Historical Institute in Warsaw. http://www.jhi.pl/en

With the information he now possessed, Meyer posted an inquiry on JewishGen’s Discussion Group and received many replies, including the crucial one that led directly to Yaffa’s son and Yaffa herself.  https://www.jewishgen.org/JewishGen/DiscussionGroup.htm